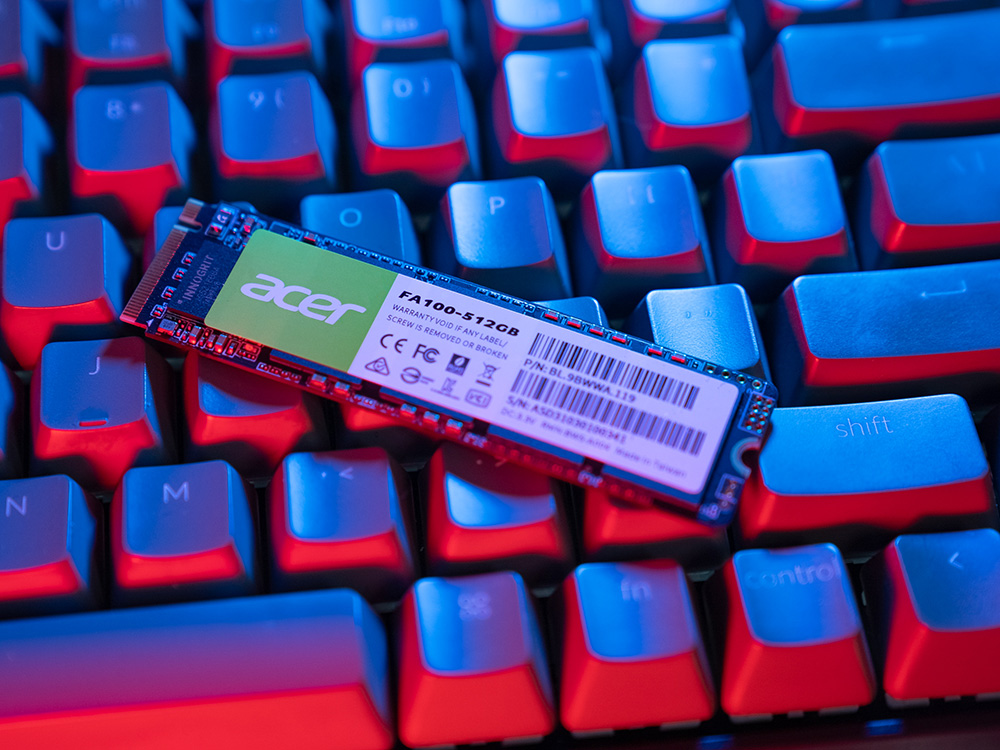 NVMe drives are a big deal in computer storage right now — and for good reason. Not only does an NVMe solid-state drive (SSD) leave most older SSDs in the dust, it’s also blazing fast compared to standard 3.5- and 2.5-inch drives.

PCIe (Peripheral Component Interconnect Express) is an interface standard for connecting high-speed components. This second-generation PCIe interface supports up to 20Gb/s in each direction. The higher the number of lanes, the more data you can move at any one time (x 4 means FA 100 provides you with four data communication lanes).

Because the PCIe interface can simultaneously read and write (full duplex) while  SATA can only read or write at one time (half-duplex), PCIe can  potentially double the 20Gb/s speeds in a mixed (read and write)  workload, making it almost seven times faster than SATA (according to Tech Target).

Acer  FA100 also uses 3D NAND ICs, the type of non-volatile flash memory in  which the memory cells are stacked vertically in multiple layers. The  design and fabrication of 3D NAND memory is radically different than  traditional 2D – or planar – NAND where memory cells are arranged in a simple two-dimensional matrix.

Designed for tech-savvy enthusiasts, gamers and professionals looking for performance and superior reliability in capacities from 128 GB up to 2 TB, the FA100 reaches sequential read- and write- speeds up to 3300 / 2700 MB/s.

Yes, that’s fast. Very fast. And speed in data processing means your work, your games, your photos and your videos will display faster and with more reliability.

M. 2 is a form factor for SSDs. The single-sided design keeps the drive 2.7 mm slim, ideal for thin laptops (but FA 100 can, of course, also be used in desktop PCs.)

Need to move all your data onto this new drive? Or back-up some previous files? The FA100 includes a free Acronis True Image cloning software.

All of this technology packed in the FA 100 comes with an industry-leading 5-year warranty.

Next Article
Upgrade to SSD? Upgrade with the SA100
We use necessary cookies to make our site work. We'd also like to set optional analytics cookies to help us improve it. We respect your privacy and we won't set optional cookies unless you enable them. Learn More