Upgrade to SSD? Upgrade with the SA100 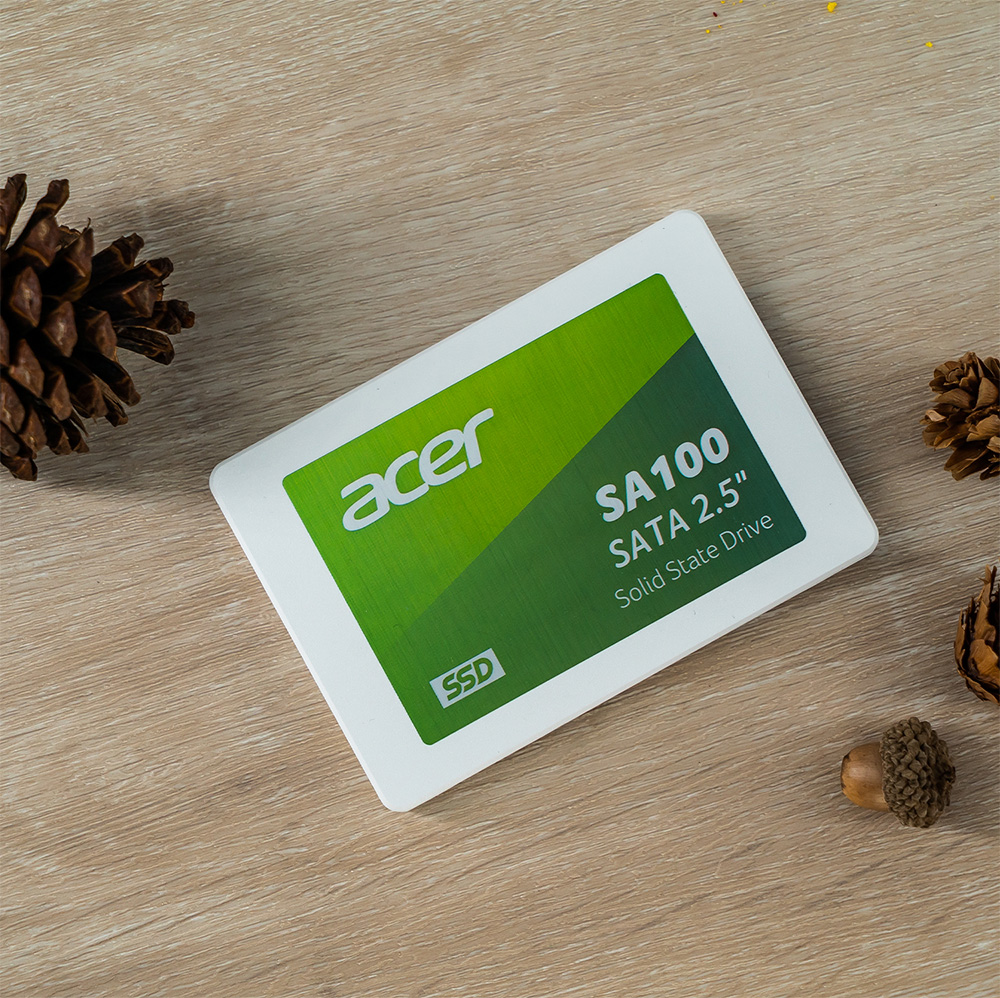 If there are any constants in computer life, we continue to demand faster performance and more storage.

Most of us would change our computers tomorrow to get a significant bump in performance. Except for the cost of a newer computer. That’s why a growing number of users consider an upgrade—buying a new critical component such as the storage drive makes a big difference at a lower cost.

Especially since traditional hard      disk drives (HDDs) are giving way to a newer, faster technology… to SSDs like the Acer SA100.

It sounds incredible but the first commercial hard disk drive was shipped in 1956. The year Elvis Presley made his first big hit. The year the first enclosed, climate-controlled shopping mall opened. Yeah, that long ago.

In fact, the HDD copied its working concept from the classic audio turntable. The HDD has a moving “arm” with several "heads" (transducers) that read and write data on spinning disks where data is stored magnetically.

HDDs, as a legacy technology, can be lower in cost and available in two common form factors: 2.5 inch (common in laptops) and 3.5 inch (desktop computers).

The SSDs get their name—solid state drives—because they have no moving parts and all data is stored in integrated circuits. Solid state technology is widely recognized across many industries as superior and efficacious  to legacy electromechanical devices.

Without moving parts, SSDs don’t make that crunch/crunch sound you hear from HDDs in some computers. (Why do you think we called it “crunching” data?) SSDs aren’t much affected by vibration or related thermal issues —  and that makes SSDs in general more reliable than HDDs.

The solid state design brings several implications, especially good ones for size and performance. For example, a midrange HDD usually offers data transfer speeds of up to 140 MB/s, while the Acer SA100 easily reaches 500 MB/s.

And SSDs start working faster (since users don’t have to wait for platter rotation to begin). Starting up faster is so important that some laptop makers are going hybrid, adding an SSD to a unit already designed with an HDD. No one likes waiting for a computer to slowly come alive.

The SA100 boots faster, launches and runs apps faster, and transfers files faster than your old HDD. An SSD can even continue to work on other tasks.

Whether you're using your computer for games, school, or business, the extra speed may be the difference between finishing on time and being late.

Without the need for a spinning disk, SSDs can go down to the shape and size of a stick of gum (the M.2 form factor). Some SSDs like the SA 100

are in the traditional 2.5” form factor so you can more easily replace an older hard drive.

Capacity—or how much data a storage drive can hold—varies, and the SA100 goes from 120GB to a whopping 1.92TB.

Speed is also influenced by the interface used — the SA100 offers SATA III, the third (and latest) generation SATA interface that runs at 6.0Gb/s.

If you’re running real-time streaming, gaming, editing videos and photos or need fast access to database files, video clips, or movies, that’s what’s known as "hot" data. Fast performance makes the SA 100 SSD an ideal choice for hot data because speedy access to your content is what matters most.

SSDs commonly use less power and result in longer battery life because data access is faster (and the device is idle more often). With their spinning disks, HDDs require more power than SSDs when they start up.

The SA100 is lightweight, thin and compact compared to an HDD. That makes it a good match for ultra-light or ultra-thin laptops. But it also fits in many of the mainstream laptops.

A game that takes two to three minutes to load on an HDD takes well under a minute on an SSD, according to Intel. Long load times can disrupt any game and fast load times protect the sense of immersion that you want in the game. You don’t have to be an esports pro to want better play.

Upgrade with the Acer SA100

When choosing to upgrade from an HDD to an SSD, there are so many more considerations beyond storage capacity and cost. Reliability, speed, noise, and power usage affect your overall computer experience.

The more you use your computer, the more benefit you’ll get from upgrading to the SA100 or another of our Acer Storage SSDs.

Previous Article
Acer FA100: Technology to Succeed
Next Article
Acer Quietly Jumps into Photography, Launches CFexpress Memory Cards
We use necessary cookies to make our site work. We'd also like to set optional analytics cookies to help us improve it. We respect your privacy and we won't set optional cookies unless you enable them. Learn More